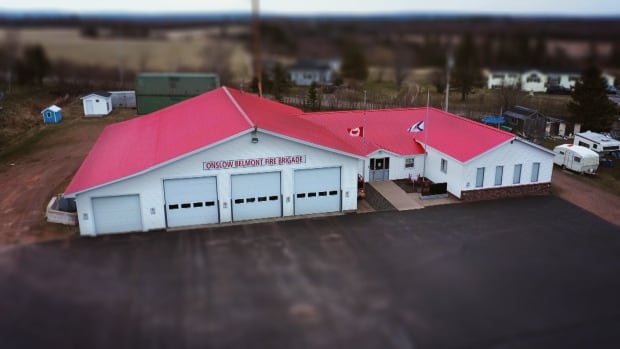 
Sharon McLellan was standing in her Onslow, N.S., kitchen talking on the phone one Sunday morning in April when she saw two men get out of a nondescript vehicle with long guns.

She said one ran into the ditch opposite her house while the second man crouched behind a wooden garbage bin in the parking lot of the Onslow Belmont fire brigade’s hall across the street. Within seconds, she heard gunfire.

That morning, April 19, police in Nova Scotia were searching for a suspect travelling between communities shooting strangers while disguised as an RCMP officer. It would end up being the deadliest mass shooting in Canadian history — 13 hours after it began in nearby Portapique, 22 people were dead.

But when shots rang out at the Onslow fire hall, the man responsible for those deaths wasn’t there. Two Mounties fired at one of their own as well as a bystander who was close to the hall near a parked RCMP cruiser.

“They started shooting,” said McLellan, “and I started freaking because I thought the shooter was there. I had no idea what was going on.”

The Fifth Estate has reviewed surveillance footage captured by cameras at the hall. It doesn’t show the shooters but reveals a hunched-over man wearing a fluorescent safety vest darting into the fire hall at 10:21 a.m. local time.

This bystander declined to speak to CBC News about the incident.

Deputy chief Darrell Currie of the volunteer fire brigade was standing inside, near one of the fire trucks, when he heard gunfire.

“Somebody come running through the front door yelling, ‘Take cover! Take cover!’ or ‘Get down!’ or ‘Shots fired!’ — something to that effect. And then we took cover as best we could,” he told The Fifth Estate.

‘Those are all near-misses’

Surveillance footage shows that a few seconds later, an RCMP officer who was stationed in front of the hall was standing with his hands up next to his vehicle.

No one inside or outside the hall was hurt. But bullets peppered the hall’s siding over a distance of several metres. The shots went through one of the big bay doors and punctured a fire truck’s windshield, fender and engine.

Shots also pierced an electronic welcome sign close to the road, which was more than 60 metres from where the cruiser was parked, as well as a granite monument by the building’s entrance.

McLellan said she later counted 32 bullet holes in the building.

“Those are all near-misses. There [were] people in there,” she said.

It cost $39,000 to repair the siding, equipment, monument and sign damaged by the gunfire. Fire chief Greg Muise told The Fifth Estate the RCMP handled the bill.

“A fire truck saved our lives — that’s my feeling,” said Muise in an interview. “I have been in the game for 39 years now and I have never experienced anything like this, and that’s what makes me angry.”

The RCMP declined to answer questions from The Fifth Estate about the mass shootings. The force referred the Onslow incident to Nova Scotia’s police watchdog agency in April.

The Serious Incident Response Team (SIRT) is still investigating what happened and why exactly the two officers fired. SIRT director Felix Cacchione said they’ve been waiting months for bullets and guns to be analyzed at a crime lab.

CBC previously reported that confusion over the cruiser and a safety vest, similar to the one worn by the mass shooter that morning, prompted the shots.

That April morning, the fire hall was being used as a safe gathering place for people who couldn’t return home to Portapique, as police remained on the scene of 13 murders and multiple structure fires.

The RCMP officer stationed outside the hall to protect the evacuees usually worked farther east in Pictou County, and the two officers who fired in his direction worked in another detachment, The Fifth Estate has learned.

CBC News has not been able to confirm the identifies of the RCMP officers.

The surveillance images show that seconds after the Pictou officer had his hands up, one of the officers who had been shooting walked toward him with his long gun pointed at the ground. They appeared to exchange words, while the second officer did a loop behind the building on foot.

About three minutes after the shots rang out, the two officers left.

That morning, Muise had opened the hall at the request of an official from Colchester County so that people forced from their homes could stop in to sign up for hotel rooms and other assistance.

After hearing the gunfire, Muise and Currie spent about an hour crouched behind tables inside the hall alongside a man whose family member was killed the previous night.

The officer who was stationed outside came inside briefly and asked if everyone was OK, the firefighters said. They said the officer didn’t explain what had happened or say if the danger was over.

Neither of the Mounties who fired spoke to the people hiding there. The surveillance video showed one of them stepped into the hall for a few seconds, then left.

‘We didn’t know what was going on’

Across the street, McLellan remained inside her house, confused and afraid.

She said she only realized the two men were law enforcement when she spotted the word “police” on the back of their black clothing. She locked her doors and hid inside her house, thinking they had been firing at the Portapique gunman.

“It was total chaos. Total chaos,” she said. “We didn’t know if the shooter was still around here somewhere … we didn’t know what was going on.”

From inside the hall, Currie looked to Twitter for information. At the same time the two officers were firing — 10:21 a.m. — Nova Scotia RCMP had tweeted that the gunman was “currently in the Central Onslow Debert area.”

“Based on the RCMP Twitter feed and our hall being shot at, the obvious assumption was that the shooter was in the area,” said Currie.

The group inside the hall didn’t venture outside until more than an hour later, after reading the RCMP had taken a suspect into custody.

It was then that the RCMP shot and killed the gunman, Gabriel Wortman, at a gas station 65 km away in Enfield — nearly 13 hours after the rampage had started.

In the hours that followed, police confirmed their suspect was dead.

That afternoon, McLellan ventured over to the fire hall and spoke to the officer stationed there to find out more about what had happened.

“He was very rattled,” she said. “He actually told us, which really broke my heart, that it was his day off and when he was getting ready to go to work, his little guy said to him, ‘Daddy, don’t go to work today,’ and he said, ‘Oh, I’ll be back before you know it, buddy.'”

Later, when firefighters reviewed their security footage, they discovered that at 10:07 a.m. — 14 minutes prior to the fire hall shooting — what appeared to be an RCMP cruiser with a black push bar on the front bumper drove by their hall but did not stop. The firefighters believe it was Wortman, as actual RCMP cars in Nova Scotia do not have push bars.

It’s unclear if the Mountie stationed outside the fire hall, with his car facing the road, saw the passing cruiser or if someone else reported the suspect was in the area.

Seven months later, the volunteer firefighters are still shaken by the experience. No one has ever explained to them why the two Mounties felt it was necessary to fire from across the parking lot or what information they had at the time.

“I think everybody deserves some type of explanation, and I assume someday we will get it, I don’t know,” said Currie. “I hope we do.”

Both men said the psychological impact of the close call has been difficult. Muise said he struggles with knowing that although he tried to help people by opening the hall, he ended up putting them in danger.

“This was supposed to be a comfort zone — most fire halls are comfort zones,” he said. “I live day by day right now, just hoping days are better. A lot of days ain’t.”

McLellan said she still thinks about what happened every time she looks across her yard at the fire hall.

“It was a mistake. They just never should have done what they did, obviously,” she said. “I think they should have to answer all the questions that everybody is asking. I mean, we pay the [RCMP], they work for us.