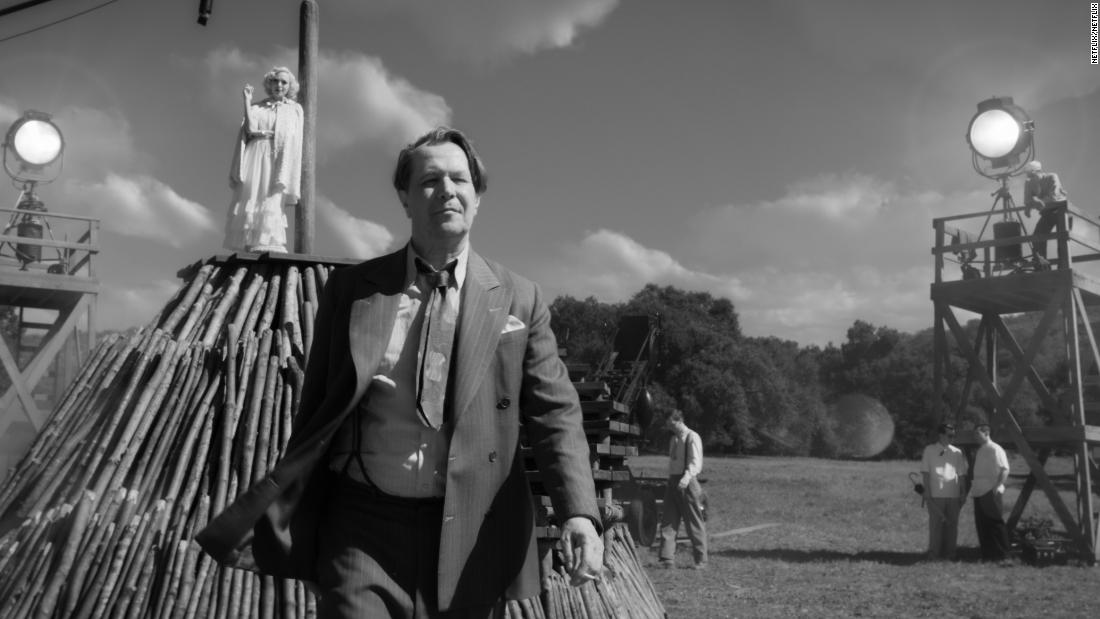 Shot in black and white to breathtakingly evoke the 1930s, the film cleverly adopts a time-hopping format intended to approximate the structure of the movie at its core. In the eye of the storm sits Oldman’s Herman J. Mankiewicz, a gifted writer and one-time unofficial court jester at the California castle constructed by media titan William Randolph Hearst (“Game of Thrones'” Charles Dance) to entertain his guests.

The movie finds a recuperating Mankiewicz hidden away in the middle of nowhere, on a tight deadline to finish the “Kane” script for 20-something auteur Orson Welles (Tom Burke, simply uncanny in capturing his voice and manner). He dictates the script, working with a secretary (Lily Collins) and live-in nurse (Monika Gossman) while fighting an ongoing battle with booze.

While that’s happening, the movie (from a decades-old script by Fincher’s father, Jack, who died in 2003) hopscotches back and forth in time, revealing Mankiewicz’s first-hand knowledge of Hearst and close relationship with his mistress Marion Davies (Amanda Seyfried), which makes the scribe’s insistence that the character in “Citizen Kane” isn’t really her far less convincing.

Only a few years removed from his Academy Award for “Darkest Hour,” Oldman inhabits another larger-than-life (if not quite Churchillian) figure as the guy who insists on being called “Mank,” painting a masterpiece that, at just 43, he seems to intuitively understand might be his first and last.

Using typed-out script notes to set up scenes, the flashbacks are awash in Hollywood lore, from studio mogul Louis B. Mayer (Arliss Howard) functioning as Hearst’s toady while raging at others to figures like executive Irving Thalberg (Ferdinand Kingsley) and producer David O. Selznick (Toby Leonard Moore), back when guys like Mankiewicz were seen as replaceable chumps — “just a writer,” as he’s dismissively told.

Even his studio-exec brother, Joe (Tom Pelphrey), can’t be counted upon to protect his interests, warning Herman that in taking on Hearst, “you’re hunting dangerous game.”

Granted, it’s difficult for any trip back through the bad old days of the studio system not to feel a trifle cliched, but “Mank” effortlessly conveys all that showbiz history in a breezily entertaining package. As difficult as it is to portray the creative process on screen — man agonizes in front of typewriter — Fincher’s approach does so better than most.

“You cannot capture a man’s entire life in two hours,” Mankiewicz muses out loud, a meta commentary if there ever was one, coming in this movie biography about Welles’ legendary roman a clef that seeks to do just that.

“Mank” arrives at an intriguing time, as Netflix’s slow but steady campaign to scale the heights of Oscar glory seems poised to pay off, thanks in part to a pandemic that has leveled the distribution playing field.

If cracking that code has at times seemed as elusive as finding a certain sled, with “Mank,” the streamer might have a movie that it can ride all the way to the top.

“Mank” premieres Nov. 13 in select theaters and Dec. 4 on Netflix.