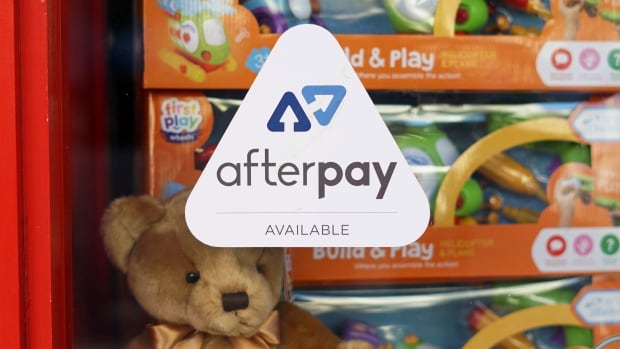 Instalment payment firms have come to Canada, but can you really buy now and pay later without a catch? | CBC News


Online shopping has exploded during the current pandemic, as have the options to pay for purchases.

In addition to the usual debit and credit options that pop up when a customer’s about to buy, a number of services have set up shop in Canada recently that give customers the option to pay in instalments — spreading the cost of shopping trip over multiple payments.

While they all work a little differently, services such as Afterpay, PayBright, Sezzle, Klarna, QuadPay, Splitit, Affirm and others give users the options to pay for purchases over time. Most have lower rates and fees than would be accrued by putting the item on a credit card. Indeed, some have no fees at all — on the user’s side, at least.

Afterpay quietly launched in Canada this past August. While the company is far from a household name here, that isn’t the case in Australia, where the company launched five years ago. It’s grown to have 10 million customers there.

Would-be customers open an account linked to a bank or other payment account, and the company handles the rest.

The way it works is simple, CEO Nick Molnar said in an interview with CBC News.

“If you’re buying a pair of shoes for $100, instead of paying $100, the customer pays four payments of $25 every two weeks,” he said. “We then pay the retailer the next day. They ship the product up front and we assume all the risk.”

There’s no interest rate added on to the purchase, nor are there any added fees or penalties for late payments. If a buyer stops paying back their purchase, Afterpay simply cuts off their account. But they don’t send the account to a collections agency.

The company boasts that less than one per cent of customers fall behind on their payments. Molnar says the system works because it works for both sides — the consumer and the retailer.

“The vast majority of instalment providers across the world have been traditional credit products that rely on very high interest rates to make their business models work,” he said. “[But] we have flipped the model on its head where we charge the retailer a small fee, which means it is completely free for the consumer.”

Returning to the shoe store example, Molnar says the retailer would pay Afterpay between four and six per cent of the sale — a price they are happy to pay because the payment firm assumes all the risk of nonpayment, and the store gets the cash up front.

Some Canadian retailers are so far pleased with the service. The pandemic has been tough on Native Shoes, a Vancouver-based seller of children’s shoes, as it has on many others. But online selling has grown significantly during the pandemic, something the company credits partly to services like Afterpay, in a time when everyone is watching their spending.

“I think it’s one more option for the customer to be able to choose how they want to pay — the buy now, pay later kind of platform just gives them a little bit more flexibility,” company president Kyle Housman said in an interview.

Native has been using Afterpay since it launched in Canada. The company says only about five per cent of customers currently use it to pay, but it expects that ratio to grow.

While the fee is higher than they’d pay with some other options such as debit and credit , the company is OK if the service grows and expands in part because they have noticed that Afterpay customers tend to buy more than others do — about 25 per cent more, Housman says, either through buying more pairs of shoes, or more expensive ones.

She’s in favour of anything that can get Canadians away from accumulating too much credit card debt, but says instalment systems can still allow consumers to let their spending get ahead of their income.

“If you’re not doing that mental math, then you’re going to have a problem,” she said in an interview. “You’re going to start owing money before you even get paid.”

And that tendency people may have to buy more when using instalment services could become a problem in the long run.

“They’re banking on that money behavior of [saying] ‘I want this now and I can’t really afford it so I’m going to do it and then I’m just going to break it out over my different paychecks,’ which is a dangerous game for anyone to play,” Simmons said. “They’re really hoping you’re going to spend more than you normally would.”