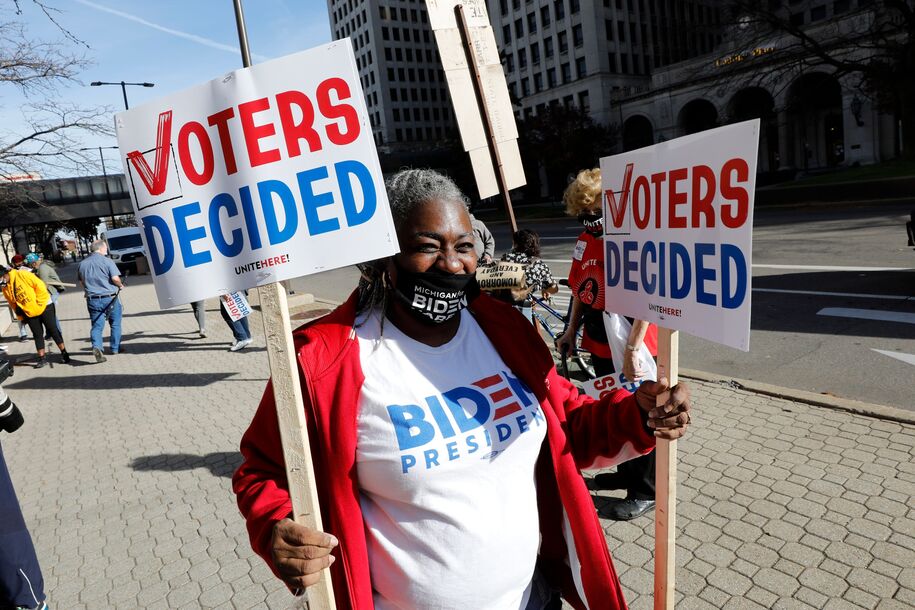 
Trump hasn’t just asked Michigan Republicans to come—they’re coming. And while the people appealing to these legislators to uphold democracy may be warning them that this could affect the next election … they know that’s not a real threat. If the Michiganders negotiate a surrender to Trump, they’re making a bet that there won’t be any more elections. At least, no elections of consequence.

They’re going to Washington expressly to hear what kind of offer Trump can put on the table. Will he permanently disenfranchise Black voters? Have William Barr indict Democratic leaders as members of an international conspiracy? Simply outlaw all other parties and declare the United States a single-party state? Why not? This was never about what’s right, it never even considered what is legal, and it’s not even tangentially related to any claims of voter fraud. It’s only about maintaining power, and Trump appears to be willing to offer anything toward that cause.

As The New York Times reports, Michigan has become the focus of a “campaign to subvert the will of voters.” That campaign has involved Trump himself directly calling Michigan vote canvassers from the White House to ask them to refuse certification. The level of interference, of undermining democracy, of simple wrongness, are off the charts.

Ten days ago, Michigan’s Republican House Speaker Lee Chatfield said that the “the person who wins the most votes” would get Michigan’s electors. But as of Friday morning, Chatfield is on his way, along with Senate Majority Leader Mike Shirkey, to meet with the man who lost the state by 155,000 votes.

There’s no secret about the purpose of Trump’s meeting today: He has invited Republican legislators to the White House to convince them not to certify the results of the election. Michigan legislators understand that there are numerous obstacles in their path, including the law. If Trump is going to convince them to throw in with him in his coup, he has to convince them that he is going to win. Otherwise, they’ll be the position of failed coup participants—which is never, ever, a good place to stand.

But as Reuters reports, Michigan is step one in Trump’s plot. While Giuliani and the other residents of the legal team clown car provide cover, Trump’s real effort is simply subversion.

A senior Trump campaign official told Reuters its plan is to cast enough doubt on vote-counting in big, Democratic cities that Republican lawmakers will have little choice but to intercede.

What Giuliani and Powell do in court doesn’t matter. It’s only their ability to stir up anger among Trump’s base and terrify Republican legislators into becoming participants. Trump doesn’t have to persuade Republican legislators in Michigan that he won. They know he didn’t. He only has to convince them that they will suffer more for not joining his coup than they will from signing over the soul of the nation.

Republican legislators in several states have been doing their best to hide. They’ve given vague statements that could be read as either supporting Trump or simply supporting the process, and attempted to hunker down until the vote certifications are done. Trump is not going to allow them to hide. He’s going to make it clear in Michigan, and in Pennsylvania, and in Wisconsin, and in Arizona, and in Georgia, that any Republican who is not for overturning democracy and seating Trump electors will become the target of the Trump-supporting mob. And in Michigan, the real nature of that threat is blindingly clear.

As David Neiwert reports, Michigan militias have plans that include public executions of officials judged to be “tyrants.” There is a reason why Trump is tweeting for more attacks on Michigan Gov. Gretchen Whitmer as the Republicans legislators are in the air—he is underscoring the positions in this game. Trump not only reminded everyone of the militia’s threats against Whitmer, but underscored the fact that he has ultimate control over the agencies that stopped those militia agents. He making it clear that there’s an us, and a them, and that anyone found not to be us … can’t expect to receive any protection.

As Kerry Eleveld reported on Thursday, Republicans in all of the states where Trump is trying to subvert the election are hearing that failing to support Trump means putting their lives, and those of their families, at risk.

Republicans may have thought that all they had to do was sit back, wait out Trump’s ego-storm, and carry on as if they had been good little agents of democracy all along. It’s not working out that way. Trump is going to bring them in, one group at a time, and show them a future where they help him and get to enjoy the spoils of a victorious coup, or they resist him and are thrown to the wolves.

What happens today with Lee Chatfield and Mike Shirkey won’t be the end of it … but it will be critical. If they say no to Trump, his coup is in serious trouble. If they fold, the slope from there to president-for-life is going to be extremely slippery.

Sidney Powell: “The entire election, frankly, in all the swing states should be overturned and the legislatures should make sure that the electors are selected for Trump” pic.twitter.com/gA6aFVhvdt

Note: If Mike Shirkey’s name seems somewhat familiar, that’s because he previously met with the same militia groups that plotted Whitmer’s kidnapping and defended them in the media. He also worked to keep allowing guns in the Michigan state house even after threats of violence against Whitmer and others. Shirkey is also leaving office in December. None of which makes him the best of twigs on which to rest the weight of democracy.