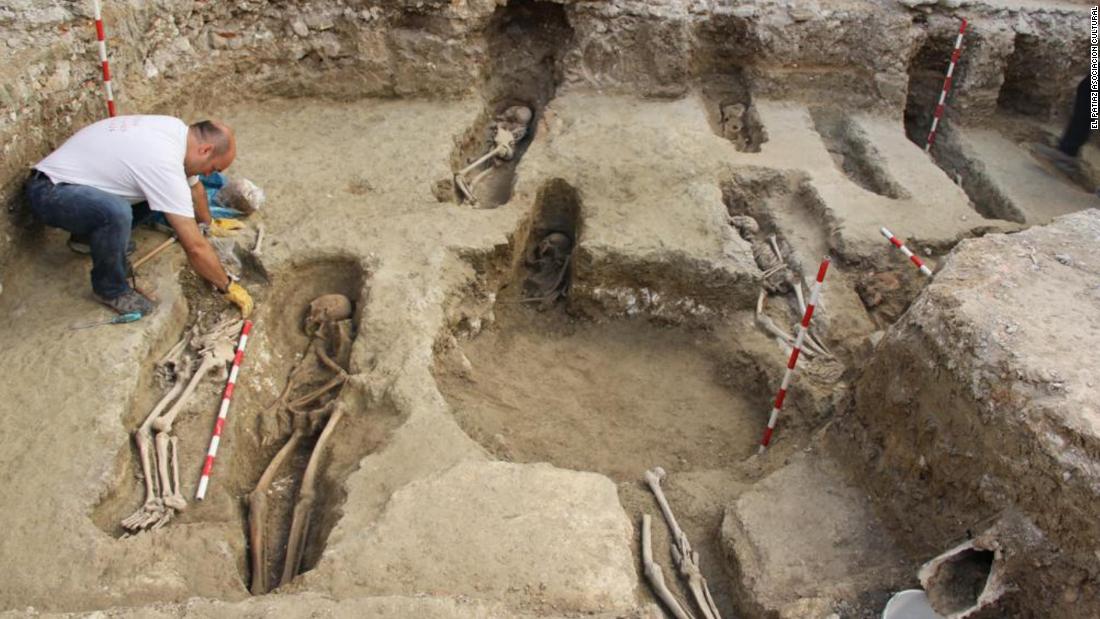 
(CNN) — An ancient Islamic necropolis containing over 4,500 bodies has been uncovered in northeastern Spain, with archaeologists excavating more than 400 tombs in the five-acre site.

The tombs were discovered in an 8th-century burial ground in the town of Tauste, near Zaragoza in Aragon, Eva Gimenez, an archeologist currently excavating the area with the Paleoymás archeology firm, told CNN.

By 711, Arab forces had invaded and begun to conquer the Iberian peninsula. They remained for the next seven centuries until 1492, when the area was totally reconquered by the Christian kingdoms.

Muslim occupation of Tauste had been considered “incidental and even non-existent” by traditional and written sources, researchers from the University of the Basque Country have said — but the region’s cultural association had long suspected the area had been home to a large Islamic settlement because of architectural clues and human remains found in the town, Miriam Pina Pardos, director of the Anthropological Observatory of the Islamic Necropolis of Tauste with the El Patiaz cultural association, told CNN.

From 711 to 1492, the boundaries between the Christian north and the Islamic south shifted constantly with the changing sovereign authority, according to researchers from the University of the Basque Country.

A first dig of the site in 2010 revealed a five-acre necropolis, spread over at least two levels, Pina Pardos said.

DNA studies and carbon dating place remains in the necropolis between the 8th and 11th centuries, according to El Patiaz.

Some 44 skeletons were uncovered during smaller excavations in the years following the initial dig, Pina Pardos said, and this year, more than 400 bodies have been found after local authorities ordered an extensive excavation of the area.

All of the skeletons had been buried according to Islamic customs, positioned to the right and facing southeast toward Mecca, Pina Pardos added.

Experts say the remains had been buried according to Islamic customs.

Experts believe the discovery will challenge previous assumptions about Muslim settlements in the area.

“We can see that the Muslim culture and Islamic presence in this area is more important than we thought,” Gimenez said.

“We can see there was a big Muslim population here in Tauste from the beginning of the presence of Muslims in Spain,” she added. “It is very important — the 400 Muslim tombs shows the people lived here for centuries,” she said.

The remains will be cataloged, stored for research and studied, Pina Pardos said.