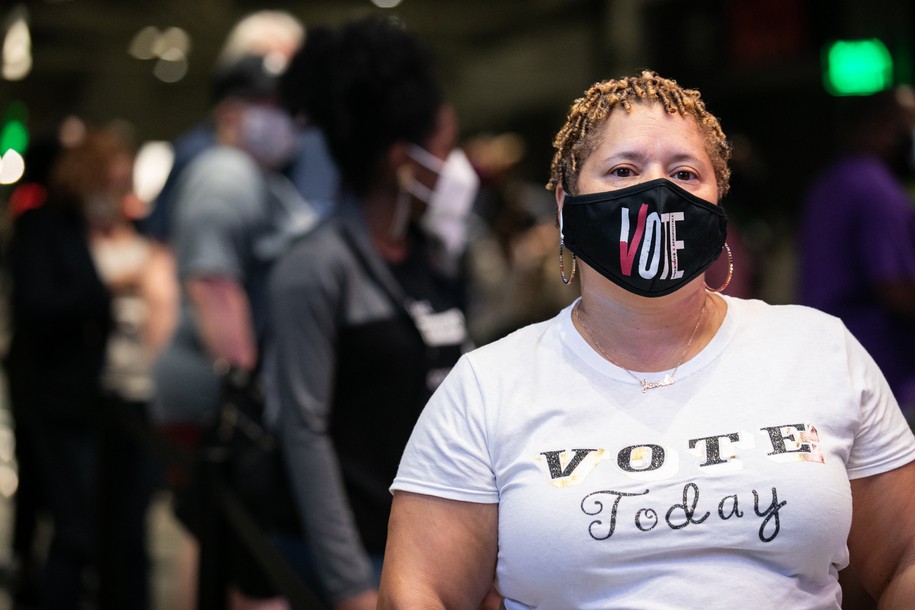 750,000 Georgians have already requested their ballots


As we saw last week, Biden won thanks to a massive increase in voter engagement.

Sore loser Donald Trump won the state in 2016 by 5%, and he added ~369,000 votes four years later. Should’ve been a slam-dunk victory. Yet President-elect Joe Biden exceeded Hillary Clinton’s 2016 totals by a mind-blowing 594,471 votes. Stacey Abrams and her allies and volunteers in the state of Georgia built something truly special—in the only battleground state in which the Trump campaign outspent the Biden effort.

Daily Kos Elections’ David Jarman came up with a fun visualization of that massive increase in voter participation: (For our current purposes, you can ignore the county comparisons, just look at the overall vote increase from previous years.)

I’m trying a new type of visualization here: this is three decades of Georgia presidential elections in bar chart form, so that we can see county-level changes in turnout as well as vote share. Smaller counties are bucketed together by media market to reduce the clutter. pic.twitter.com/B6Yoy44lMd

But as awesome as that voter turnout is, fact is, Georgia special elections go to the candidates who suffer the least amount of voter drop-off. And given that Biden’s victory was built in large part on record performance by young and brown voters, there is real trepidation over whether they will turn out in January. Getting those voters to the polls has always been a challenge for Democrats.

And that’s where Abrams’ news is so welcome. This is the first year that Georgia has had this kind of extensive vote-by-mail, so we can’t compare those 762,000 requests with anything else, historically. (That number is already three times the number of absentee ballots that were requested in all of 2018.) But here’s what we can guess at:

In the November election, just a smidgeon over 4 million Georgians voted early, and those numbers were heavily Democratic, as Republicans bet everything on the day-of vote. That won’t change in the runoff, as grassroots Republicans are 100% bought in on the vote-by-mail conspiracy theories. That’ll make those ballot requests a decent proxy as to the strength of the Democratic turnout. (Remember that requesting the ballot is just the first step, they also have to be returned.)

Meanwhile, Republicans have their own turnout issues to deal with. America’s worst loser ever, Donald Trump, has a supernatural ability to bring out a class of non-voters I’m calling the Hidden Deplorables. They didn’t turn out in 2017, 2018, or 2019, but they were out in force in 2016, and supercharged in 2020. In fact, ten million more people voted for Trump in 2020 than in 2016. In Georgia, that translated to 369,000 more Trump voters. So will they be back in January. Their track record says no. Republicans will be doing everything possible to change that.

I’m seeing a lot of talk from people that are supposed to be on our side telling GOP voters not to go out & vote for @KLoeffler and @PerdueSenate.

We need ALL of our people coming out to vote for Kelly & David.#MAGA #GASEN

But who listens to Don Jr. anyway? No one, that’s who. Daddy Trump himself doesn’t give two shits about the runoffs or Mitch McConnell or the U.S. Senate, and likely sees them as the enemy for giving his coup attempt insufficient support. He certainly has zero loyalty to the Republican Party,

What’s worse, his lawyer-who-is-no-longer-a-lawyer actively claimed this weekend on Newsmax TV that its Republican governor Brian Kemp and Secretary of State Brad Raffensperger had stolen the election for Republican Sen. Kelly Loeffler, and that conservative firebrand Rep. Doug Collins had actually gotten more votes than her in the first round. “Georgia’s probably going to be the first state I’m gonna blow up,” Powell said. “We don’t know who bought their election. I’m sure it crosses party lines. I’m reasonably certain John James was ripped out of his seat, and he was entitled to have won that election by the real vote, and the same thing is true for Doug Collins in Georgia.”

Grassroots conservatives are fueling that irrational rage at Kemp, Raffensperger, and the national Republican Party.

The comment boards of conservative sites are full of this kind of talk as well. Over at Breitbart, in a story about that Don Jr. tweet above, the commenters were having none of it.

The Democrats will steal the senate seats in GA and Madame Ho will be president by February 2021.

Republicans in the house and senate don’t care. It’s a waste of time to vote for them. They will just side with Democrats anyway.

We are all lucky, most of us at one point saw how great America was and the beginning of the end.

(Yes, “Madame Ho” is their name for Vice-President-elect Kamala Harris.)

Bottom line is The GOP helped remove Trump from office. I can’t support them ever again. They are not the solution to what is facing America anyway. We need to unite and use massive civil disobedience to cripple this corrupt anti-American government.

There’s lots of talk about turning into militias as a response to their disenchantment with the Republican Party.

Here’s what the people of GA see:

-We see a Corrupt Gov Kemp and an even more Corrupt SoS Raffensperper allowing the Democrats to CHEAT in broad daylight, in front of the entire World, and not lifting a finger to stop them.

-We see RINOs turning against Trump (who we all know won, minus the Fraud) and backstabbing him, as they always do.

-We see these same RINOs begging us to turn out to support their candidates so that THEY can keep power.

Imagine being Kemp, Trump’s most reliable pro-COVID-infection ally, and being turned into a RINO because you can’t steal an election for Trump.

We have to send a clear message to the Republican party that we expect them to listen to us and without us they have no power. Not voting in this runoff will send a clear message to them that if they choose to ignore us they have no power or careers going forward. Yes it’s unfortunate that Dims. will control the senate for 2 years but with just 50 votes and Manchin in there they won’t be able to pass any of the super insane AOC/Omar squad type stuff. In the meantime Republicans will realize that we mean it when we say we expect them to change election laws so it’s not so easy to inject fraudulent votes into the pool with things like universal mail in ballots, no ID voting, requiring poll watchers to watch from 100 feet away, and electronic voting that has no meaningful way of being audited. After two years America will be so tired of the idiotic and incompetent Biden administration that they will overwhelmingly elect a R senate and house and in 4 years they will send Trump back to the White House! MAGA!

I remember that argument from leftists last time, that Trump would make things so bad that progressives would win in a 2020 landslide. How many people died because of that kind of white-privileged thinking? How much is that 6-3 Supreme Court going to f’ us? I’d rather see that thinking on their side than ours, that’s for sure.

I live in Georgia and am disgusted with the Republican party here refusing to support President Trump. I won’t be voting for either of these clowns. I am writing in Collins instead of Loeffler. She’s not even from Georgia and is the biggest globalist ever to run for the US senate!

Sorry Don Jr., these people don’t support you. If you ever decide to run, they will block you all the way like they did you Dad. Let’s tear down the republican party and remake it as a populist party for people like us. Kick out all the RINOs!

And it goes on like this, hundreds and hundreds of similar comments. Now, we don’t know if this represents massive unrest among conservative voters, or whether it’s just post-election kvetching and macho posturing. But remember, Biden won by less than a half a percent. Every defection from both sides will matter, and it will come down to which one suffers the least.

One side is energized and celebratory, ready to finish the job we started in November (and long, long before that over years of organizing). The other party is led by a sore loser whose team has attacked the state’s Republican leadership. The grassroots all think the election was stolen and many think their votes don’t matter because of fraud.

No matter who wins, this thing will be close. And right now, I’d rather be us than them.