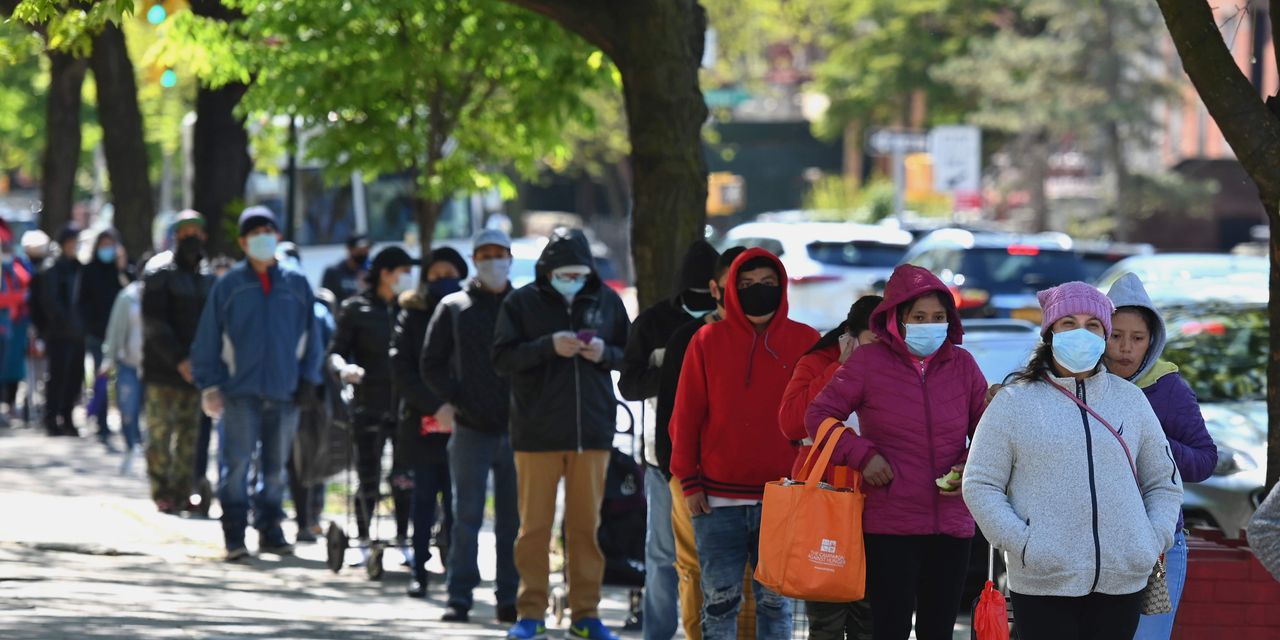 10 ways you can help other people this Thanksgiving: ‘There is always a need for food assistance’

The country’s most food-centric holiday is likely to inspire a deluge of donations and volunteerism — but do-gooders should keep up the action even after Thanksgiving passes, advocates say.

Pandemic restrictions have left millions of people jobless and many children without subsidized school meals, heightening food insecurity. More than 50 million people in the U.S., including 17 million children, could experience food insecurity in 2020, found an updated analysis published in October by Feeding America, a nonprofit network of 200 food banks and 60,000 food pantries and meal programs across the country.

“Before the COVID-19 crisis began, more than 35 million people, including nearly 11 million children, lived in a food-insecure household,” the report noted. “Pre-pandemic data reflect the lowest food insecurity rates had been in more than 20 years, but the current crisis has reversed improvements made over the past decade since the Great Recession.”

About one in five Black and Latinx adults, and one in 14 white and Asian adults, say they don’t have enough to eat, according to a separate September report by the nonprofit Food Research and Action Center.

“What is more surprising is the extent of hunger,” that report’s authors said. “It’s not just the poorest families who are facing this struggle; among those who don’t have enough to eat, 1 in 4 have usual incomes above $50,000 per year.”

Before you raid the depths of your pantry for old cans of beans, read these tips for giving wisely on Thanksgiving — and in the days, weeks and months that follow:

Check to see what your food bank or food pantry needs

Food banks and similar organizations may have specific needs for their own individual responses right now, and you can be most helpful by checking their website or calling ahead. Ask what items are in short supply or what the organization could benefit from most, Una Osili, an economist and associate dean for research and international programs at the Indiana University Lilly Family School of Philanthropy, told MarketWatch.

“Especially now in this COVID pandemic era, we really want to give food banks exactly what they need in the moment, because they don’t have the added capacity to sort through donations,” Villarreal added.

You can try using AmazonSmile Charity Lists, which allow you to buy and donate needed items directly to a pre-vetted charity, said Chronicle of Philanthropy editor Stacy Palmer.

“
‘By and large, [organizations] are always in need of financial support, so you never can go wrong there.’
”


— Janis Robinson, the vice president for institutions and partnerships at the Food Bank for New York City

You should also call to inquire about volunteer opportunities, which might be different or limited this year due to the pandemic. About 60% of the food banks in Feeding America’s network are accepting and in need of volunteers, while 25% are accepting volunteers but don’t need them, Villarreal said. Another 10% are not accepting volunteers, perhaps because their communities have been hit hard by the pandemic and they’re finding it safest to use hired staff, she said.

“If people know of a food pantry or soup kitchen, they might make a phone call — but [they] can’t assume there are opportunities to volunteer as there have been in the past,” said Janis Robinson, the vice president for institutions and partnerships at the Food Bank for New York City.

While it may feel good to drop off a physical box of canned goods, “food banks can do a lot more with the cash,” Palmer said, especially because the items you drop off might not be the ones in highest demand. Food banks can also buy goods wholesale and stretch the money much farther than ordinary donors can.

Case in point: “One dollar donated provides five meals,” Robinson said. “By and large, [organizations] are always in need of financial support, so you never can go wrong there.”

Food banks are currently operating “in a kind of disaster-response mode,” Villarreal added. “In times of disaster, financial donations are always mentioned as the quickest and easiest, most efficient way to support [responding] organizations because they’re able to buy the truckloads they need at a reduced cost, or get it donated and just pay for the cost of shipping or the cost of transportation.”

If you can’t give cash or otherwise decide to donate food, opt for “anything that you’d want to find in your own pantry,” Villarreal said. Think staples like peanut butter, pasta, rice, beans and cereal, she said, and think about the person who will be receiving the food. Don’t donate expired food, leftovers or items that need to be refrigerated.

Have a professional skill? Volunteer it

“We tend to focus on the money, and that’s important — but certainly there are many more resources that people have,” Osili said. “A lot of hunger and relief organizations have tremendous capacity issues because there’s so many more people that may need help, and their staff may be limited.”

“
As much as you might want to escape from your day job, the skills you use there —  especially relating to marketing, fundraising or logistics —  could be of help to a nonprofit.
”

Offering financial, legal or accounting help can be extremely helpful, especially for small organizations, Osili said. If such opportunities aren’t listed on an organization’s website, a call never hurts.

If you have a social-services background, you may even be able to offer virtual assistance in helping individuals apply for safety-net programs such as the Supplemental Nutrition Assistance Program (SNAP, formerly known as food stamps).

“For many donors, starting locally makes a lot of sense,” Osili said. See how your local United Way organization is responding to COVID-19, and check whether you can get involved with a mutual aid group in your neighborhood.

Look within your existing social networks for donation or volunteer opportunities to have a greater collective impact and build a sense of community, Osili added. Talk to people in your neighborhood, religious congregation, workplace or child’s school to avoid duplicating efforts that are already ongoing.

Of course, there are plenty of national and global organizations that need help too. Osili highlighted America’s Food Fund and Feeding America at the national level, and the World Food Program, CARE, UNICEF, World Vision and Mercy Corps at the global level.

“Food insecurity has been one of the top areas that we’re seeing in many different countries where vulnerable groups, especially women and children, are facing higher levels of hunger as a result of the health and economic crisis,” she said.

See if your workplace will match your donation

“Many companies offer matching funds, and they’ve increased the match during COVID,” Osili said. Some companies will also donate money to organizations based on employees’ volunteer hours.

“Food banks alone can’t solve the issue of hunger, and we need strong federal support — so if anybody is inclined, they can certainly reach out to their local congressman and their senators to push for strong support for nutrition programs,” Villarreal said.

In addition to writing to elected officials, you can also post on social media and organize virtual community meetings to bring more attention to the issue, Osili said.

Make your donation quick and seamless

As nonprofits deal with increased need and displaced staff, “they don’t have as much time for hand holding and providing lots of information,” Palmer said. The more research you can do on your own, the better.

You should, of course, be on the lookout for charity scams or fraud. But “if you really trust the charity, trust the charity,” Palmer said, rather than asking endless questions about how your money will be used. “We should just give generously and not make a big fuss about it, and recognize that their time is stressed,” she said.

“
‘We ask people to stick with us for the long haul if they want to support us.’
”

You can also show appreciation for people who work at food pantries or food banks by including a note with your donation thanking them for the work they’re doing, Palmer suggested.

Don’t forget about the CARES Act provision that lets people who give to charity in 2020 deduct up to $300 of the donation from their taxable income without having to itemize.

“There is no guarantee it will be extended, so be sure to do it before the year is over,” Palmer said. “Not only is it smart financially, but it demonstrates to Congress that it is important to extend and expand incentives for people to give to help others.”

Keep caring once Thanksgiving is over

“There is a ton of support typically during the holidays — but what we know in this line of work is that there is always a need for food assistance,” Robinson said.

In other words: Hunger is an ongoing crisis, and it doesn’t end the day after Thanksgiving. The same food banks, food pantries and soup kitchens will still need help in the coming months.

“We ask people to stick with us for the long haul if they want to support us,” Villarreal said. Maybe you’re able to volunteer at one point, make a financial donation another time, and make calls to your elected officials down the line, she said.

Don’t forget about other worthy causes

While we tend to think about food-related causes at this time of year, it’s important to remember that “need is tremendous at any kind of nonprofit” right now, Palmer said, as many organizations face increased demand alongside increased cost of doing business.

So while you should absolutely give to food charities, think of other worthy causes and give generously to them too, she said. “Whatever cause you care deeply about, they could use some extra money right now — and anything you have to give, they will appreciate.”